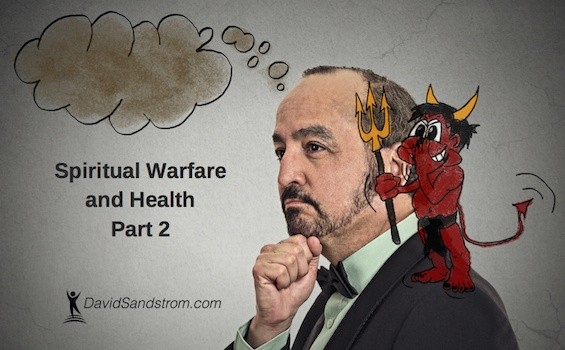 The secret to finding the abundant life is spiritual warfare. This information on spiritual warfare and health has the power to set you free. But you must press through the temptation to dismiss it.

Maybe you’ve read Part 1 of this series and are beginning to think: “This guy is some kind of a zealot. I have better things to do than read this.” I can assure you; I am not. The enemy wants you to think that way. Don’t hand him the victory. Push through the opposition…..

[callout]To reveal the bible verses, read from your browser and hover over the verse reference.[/callout] [callout]This post is part 2 in a series. If you haven’t already done so, read Part 1 now. [/callout]

Make sure you don’t go through life with a kindergarten attitude towards spiritual warfare. As one of my favorite authors John Eldredge says in his book Waking the Dead: “Most of us got our theology from a children’s song we used to sing in Sunday school to a very upbeat tune:

“I may never march in the infantry, ride in the calvary, shoot the artillery. I may never fly over the enemy, but I’m in the Lord’s army, Yes Sir!”

Doing what may I ask?”

The first tactic the enemy uses is to get us to think there is no battle going on. He’s not even there. If he is, he’s harmless. He’s just a little guy in a red suit and a pitchfork, kind of cute actually.

This is the picture the world has created for us about satan. The trouble is, the bible paints a very different picture.

“Be of sober spirit, be on the alert. Your adversary, the devil, prowls around like a roaring lion, seeking someone to devour.” (1 Peter 5:8)

[callout]If satan can get us to believe his lies, he can compromise our health by exploiting the mind-body connection.[/callout]

Most people don’t see the connection between spiritual warfare and health. This is because we all desire to go through life as if we’re on a cruise ship, when in fact we’re on a battleship.

“The idea that this world is a playground instead of a battleground has now been accepted in practice by the vast majority of Christians.“

Many of the references in the bible regarding spiritual warfare are veiled in imagery. Ironically, to get a clearer picture of what’s going on in our time, we must turn to a book that uses a lot of imagery, the book of Revelation, specifically chapter 12. (Revelation 12:1-17). I encourage you to read the entire chapter, but here’s an excerpt:

“And the great dragon was thrown down, the serpent of old who is called the devil and satan, who deceives the whole world; he was thrown down to the earth, and his angels were thrown down with him….” (Revelation 12:9)

“So the dragon was enraged with the woman, and went off to make war with the rest of her children, who keep the commandments of God and hold to the testimony of Jesus.”  (Revelation 12:17)

satan has been cast down but not ultimately destroyed. He’s raging at God, and seeks to hurt him by warring, or bringing harm to us. satan’s got us in his cross hairs and he’s not smiling.

I don’t like this fact any more than you do. But that’s where we find ourselves. The sooner we come to grips with this fact the better off we’ll be. There is a battle going on.

“From the days of John the Baptist until now the kingdom of heaven suffers violence, and violent men take it by force. (Matthew 11:12)

This explains why the abundant life is so hard to find. This is the secret to finding abundant life. In order to stand any chance of walking in it, we must do spiritual warfare well.

The Battle Takes Place in our Minds

The most fundamental part of being human is the fact that we have free will. Every day we must exercise our wills and make choices to follow after God’s law of life in Christ, or satan’s law of sin and death. (Romans 8:2)

We don’t live by the Mosaic law today, but the principle is the same. Following after God’s law of life in Christ brings blessings. Following after the law of sin and death brings trouble. (Romans 8:2)

It’s about holiness, or our sanctification. (2 Corinthians 7:1) Our bodies, souls and spirits are interconnected and interdependent. As such, we have a spirit-mind-brain-body connection.

Here’s the heart of the matter: it’s the truth that sets us free. (John 8:32) satan is a master deceiver and the father of lies. (Revelation 12:9) (John 8:44). If he can get us to believe his lies, he can compromise our health by exploiting the mind-body connection. See my post on How Thoughts Affect Our Health.

No one wakes up in the morning and says: “I think I’ll follow after the law of sin and death today and see what happens.” We must be deceived into do so.

Let me explain further. To be continued…..

[Tweet “”Our bodies, souls and spirits are interconnected and interdependent.” David Sandstrom”]

Are You Enough? Part 2

Are You Enough? Part 1

Intermittent Fasting For The Spirit