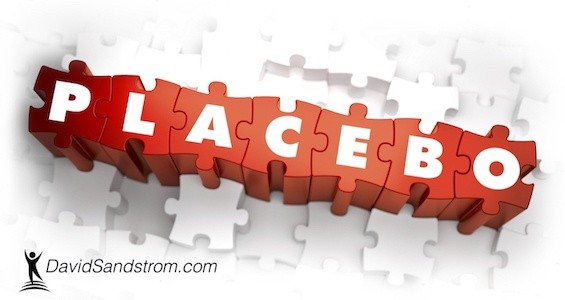 Medical doctors are trained to apply the “gold standard” for scientific research when it comes to accepting an hypothesis as truth. What is that gold standard? The double-blind placebo-controlled clinical trial.[featured-image single_newwindow=”false” alt=”Placebo”]Image from Dollar Photo Club Created in Canva[/featured-image]

[callout]If you care about your health, watch what you think, and say, and especially question what you believe. It does affect your health.[/callout]

When I make the claim that our beliefs, and our thoughts affect our health, the natural question to ask is: “Where’s the double-blind, placebo-controlled clinical trial that supports your conclusions?”

Approximately 1/3 of the participants in clinical trials given a sugar pill, or some other inert substance, actually experience the outcome the researchers hope to demonstrate with the new drug or procedure.

Drug companies must demonstrate that the new drug is more effective than the placebo effect, or the FDA won’t grant approval. Consequently, researchers would love it if the placebo effect would go away, but it won’t.

The placebo effect is always present. Rather than trying to dismiss it, I suggest we explore it more.

Effect Could Be Much Greater

Imagine if a trial were constructed where every person received a placebo but were told that they were actually receiving a powerful, effective, scientifically proven drug that was sure to relieve their symptoms. I suspect the percentage of positive responses would sky-rocket.

Researchers do their best to minimize the placebo effect to remove bias. For instance, in many trials, applicants are given a sugar pill before the study starts. Anyone that shows a reaction to the pre-trial placebo is excluded from the study.

Remember, the people that make it in to the study are told that they are in a clinical trial, and that some of them may get a placebo. It would be unethical to lie to people and lead them to believe they were getting the new drug, when in fact they weren’t. Review boards would never allow this. But, under these conditions, the placebo effect could rise dramatically.

All in Your Head?

Some may argue that placebos only result in “perceived” benefit but the body is not actually responding. In other words, “it’s just all in their heads”.

In an article published in the Journal of the American Medical Association, (1) Dr. Henry K. Beecher documented how people given a placebo benefited; not simply in their minds, but in real, physiological ways that could be demonstrated.

In her book, Dr. Rankin has scientific proof from the medical literature to back up every one of the above claims.

Sham Surgery has the Same Effect

The placebo effect holds true for sugar pills, as well as sham surgeries. In a landmark study published in the New England Journal of Medicine, Dr. Bruce Mosely, an orthopedic surgeon, devised a study that compared his knee surgery with placebo. (3)

Some of the study participants underwent actual arthroscopic surgery, while others were given an incision, and a flush with water, but no surgery. During the sham surgery, patients were shown a video of an actual knee surgery on a monitor.

After one year, the sham surgery patients received an equal amount of pain relief and return of function as the real surgery patients! This is convincing evidence that what we believe translates into real, physical, not just “perceived” benefits.

[callout]To read the bible verses: Access From Your Browser and hover over the verse.[/callout]

The bible has been teaching that beliefs, and thoughts matter for thousands of years. Proverbs tells us that we are what we think. (Proverbs 23:7)

The bible doesn’t say monitor your thoughts because there’s a mind-body connection that you cannot ignore, and stressful thoughts will impact your health because of the release of stress hormones and excess catecholamines. But, it does tell us that if we implement God’s wisdom and instructions, it will bring health to our physical bodies. (Proverbs 4:20-22) (Proverbs 3:7-8)

God is always looking out for us, and he has our best interest in mind. God never tells us to do something if it’s not to our benefit. In addition, if he tells us to avoid something, you can bet it has potential to bring us harm. We would do well to simply trust God’s intentions towards us, and do things his way. It will ultimately bring health.

The bottom line is this: If you care about your health, watch what you think, and say, and especially question what you believe. It does affect your health. Next week we’ll be going over how to recognize limiting beliefs that may impact our health.

[Tweet “”Watch what you think, and say, and especially question what you believe.” David Sandstrom”]

(2) Mind Over Medicine: Scientific Proof That You Can Heal Yourself chapter 1, 10% on kindle reader.

Are You Enough? Part 1

Intermittent Fasting For The Soul