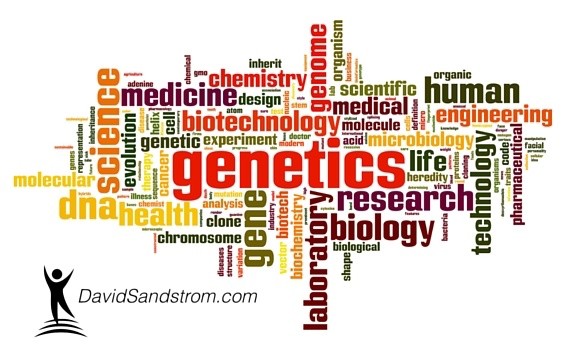 Genes Are Not Destiny

One of the most common misconceptions I run across is the belief that whether or not someone is healthy, or sickly, is mostly a matter of their genetic programming.

We hear it all the time. A person may have high cholesterol, and, they say: “It runs in my family therefore, it’s genetic.” Or “They way I’m wired, I may as well attach those donuts directly to my thighs.”

They may think it’s a personality trait they’re born with like: worry, or laziness, or addictions. All of these statements reveal a belief in what I call genetic determinism.

Genes are not destiny. From where I sit, this type of thinking is a cop-out. It removes personal responsibility from the equation.

Which is of course, exactly what the pharmaceutical industry wants us to believe. It’s not your fault. You just came up short on life’s cruel game of genetic roulette. Don’t you worry; we’ve got some pills that will help with that. So what if you have to mortgage your house to pay for these miracle pills. It’s worth it.

Of course I have a little tongue in check when I write this. However, it’s not too far from the truth.

[callout]Warning: Put your thinking cap on, because this is a 201 – master level post. Get ready to let the truth set you free.[/callout]

What I want you to understand is that lifestyle choices, that are very much within our control, have more to do with our present state of health than our genes do.

[Tweet “”Lifestyle choices have a greater impact on our health than our genes.” David Sandstrom”]

I have room to talk about genetics. My wife Michele is an identical twin. And we have identical twin girls. Identical means that their genetic makeup is identical. If everything in life from personality traits, to immune function were simply a matter of genetics, then I’d be noticing a lot more similarities than I do.

What I do see is dramatic differences. Why is this so? It’s because genes are not destiny.

Yes, they look similar. Our genetics play a big role in the way we look. However, did you know that identical twins still have unique fingerprints? And the differences don’t end there. Our twins have very, very different personalities.

Research into the field of epi-genetics (epi means above or beyond) is now pointing to the fact that our genes may be far less influential than we once thought.

Think of it this way. If I sent a lock of hair, and a fingernail clipping to a lab and had them tested for DNA, as long as they came from the same person, or identical twins, the genetic code would be the same.

So, this begs the question, since cells have the same genetic coding, when a baby is forming in the whom, how does a cell know that its supposed to become a lock of hair or a fingernail?

The answer is the genetic code is turned on and off by signaling from the environment surrounding the cell. This is referred to as genetic expression.

Cell Nucleus is not the Brain

Here’s an important point. Many scientists, are stuck in the Newtonian physical model of the universe, (gravity, mass, acceleration etc.). It was believed that since the nucleus is in the center of the cell, and it contains the genetic code, that it must be the cell’s brain, or control center. This has now been proven to be false.

Scientists can enucleate or remove the nucleus from a cell, which they often do in the manufacture of vaccines, and the cell will continue to behave as any other cell, doing all the things a cell needs to do without it’s nucleus. It the nucleus were the cell’s brain, this would not be possible.

Our genetic programming that is in the nucleus, is turned on or off as a result of signaling from the environment outside the cell. This is called genetic expression. Genetic expression is not determined by the nucleus as was once thought.

The brain of a cell is actually the cell’s membrane. The cell communicates with the outside world through it’s membrane. It’s the environment surrounding the cell that determines our genetic expression.

Let me explain. The cell membrane is a very thin, porous layer of tissue surrounding the cell. The environment outside the cell is referred to as the extra cellular fluid. This fluid contains: oxygen, water, nutrients, toxins, etc. In addition, the cell is surrounded by quantum-physical energy. This energy refuses to conform to the physical laws defined by Newtonian Physics.

The cell membrane has a complex structure with gates and channels. These gates and channels, in response to outside stimuli, open and close allowing some things to pass in and out of the cell, and preventing other things from doing the same.

The membrane effectively sends signals to and from the inner workings of the cell, and it’s external environment, acting as the brain or control center.

This system acts remarkably similar to a silicon computer chip allowing the cell to be programmed to behave in certain ways. In other words, the internal behavior of any given cell is determined by the environment surrounding the cell.

Why do I take the time to make these points? Well, we have no control over our genetic programming inside our cells. However, we have plenty of control over what’s going on outside the cell, in the extra-cellular fluid. And, that’s what matters most.

So, instead of going straight for the symptom relief, with pills and surgery, we’re better off thinking about what lifestyle modification would make the greatest impact for whatever physical ailment we’re dealing with. This makes a lot more sense to me. I hope it does to you as well.